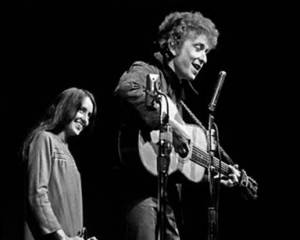 “This isn’t Bob Dylan,” said my son in the car on his way to swimming class.

“Only Bob Dylan. All year. You said.”

“Well,” I countered, “he’s playing the harmonica.”  We were listening to “Silver Dagger”, the lone Baez solo song on Bootleg Series 6: Live from the Philharmonic Hall.

“It only counts if Bob Dylan is singing.”

Sebastian is interested in the Dylan project even when he is flummoxed by it. Later on the same trip he complained that we’d already heard one of the songs and I told him that this was a live version.

“It all sounds the same. Same same same” he said.

“Then why did you complain about “Silver Dagger”?,” I asked.

Some of the material plays well on repeat, others not so much. On Bootleg Series 6 Baez and Dylan absolutely massacre “Mama, You Been On My Mind”. They are out of sync. They can’t agree on the lyrics. You can hear Dylan telling them to her mid-song. It’s a debacle, but a charming debacle. The audience finds it cute in its spontaneous genuineness. So did I the first time. Third time through I can’t listen any longer. Charming quickly becomes cloying and I thumb to the next track.

Good show generally. Nice to capture Baez and Dylan together on the downswing of their time together in the fall of 1964 (the rupture would come six months later in England).

I can’t find any footage of the Philharmonic Hall show, so here’s Baez’s version of “Silver Dagger”, the first track on her first album.