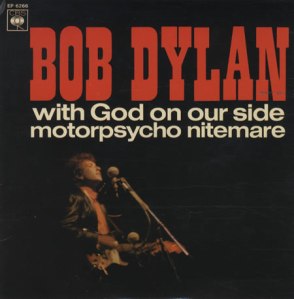 I guess I find it necessary to address my teenaged self. When I was sixteen or seventeen I thought “With God On Our Side” was one of the great Bob Dylan songs. Today? Not so much.

Here’s why I don’t like it. It is sort of droningly repetitive. It is dull and predictable. It is musically inert and lifeless. It goes on way too long. There seems to be very little that can be done with it to improve it. It has one of the all-time worst Dylan rhymes (on the Holocaust, he says of six million dead “In the ovens they fried” – hey, there are only so many things that rhyme with “side” and he’d already used ‘pride’, ‘hide’ and ‘died’). I have to say that it’s semi-embarrassing that I ever touted this as a great anti-war anthem.

Here’s why I did like it. It marched through the history of American war exploits as a lament, and in a mid-1980s Cold War atmosphere filled with fractionally talented punk rock lyricists, this seemed like poetry in comparison to more contemporary bands that I was listening to. The song has a profundity that probably seems most profound to the young.

Here’s what I still like about it: the penultimate verse, about the betrayal of Christ. That’s still a good piece of writing for a pop song.

Dylan did a great version of this at Town Hall, where he first performed it, but the most interesting version to my ear is the Carnegie Hall show in October 1963. During that rendition, the crowd applauds on a couple of occasions at the conclusion of verses, including the one about the Second World War and the fact that “we forgave the Germans, and then we were friends”. It’s a really telling moment for me, indicative of certain attitudes about that war among the young people of the 1960s that have been obscured over time.

Listening to it now, I find versions are better or worse depending on what Dylan puts into it vocally. With its minimalist instrumentation, it’s a good showcase for his lamenting voice when he lets it be. Overall, a song that’s fallen a great deal in my estimation, but once upon a time it was a favourite.

The image at the top is from its release as a single in France. Here he is singing it on the BBC in 1964: 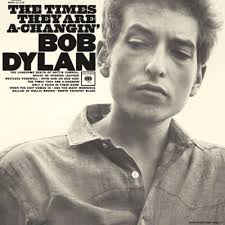 Released fifty years ago this month (January 13, 1964), The Times They Are A-Changin’ marks the end of the second phase of Dylan’s career. His first phase, the Woody Guthrie acolyte who sings traditional folk songs, carried him through 1962. The second phase, the great writer and singer of topical and political songs, made him a star, but was also incredibly short-lived. After this album, Dylan only very rarely recorded the kind of directly political songs about injustice that can be heard here (“Hurricane”, is an extremely notable 1970s version of a song like “The Lonesome Death of Hattie Carroll”). By mid-1964 Dylan would move in an entirely new direction, marking the third period of his very young career.

The Times They Are A-Changin’ came into this project as one of my favourite of his albums, and that hasn’t changed. As a teenager, I listened to Dylan over and over in the basement of my parents’ house while playing pool. We had a turntable there and a pair of speakers. This is the album that I played to death, and I can probably still sing most of these songs by heart. I hate to say it but the teenaged me liked the militant Dylan – and I probably would have been one of the people booing him in 1965.

The album was recorded in August and October 1963, combining several songs that Dylan had been playing live for a while with some all new compositions. The album (his first to contain only his own songs) has a large number of ballads, and very little humour. It is as dour as the black and white photo of him that graces its cover. Perhaps not surprisingly, the songs that have survived the longest are also some of the least topical and the least tied to their moment.

The album opens with the eponymous title track, a song that was deliberately written to be an anthem of its time – now it gets played over the montage that opens every single documentary about the legacy of the 1960s. It’s still a great song, no matter what the filmmakers have done to it. “Ballad of Hollis Brown” had been around a while, and is a darkly grim tale of despair: “There’s seven people dead on a South Dakota farm…”. “One Too Many Mornings” is another great song, though this arrangement doesn’t particularly show it – Dylan retooled it later on to make a better live version. “North Country Blues” is actually a really good song about outsourcing and the economic decline of mining, but he never really used it (his website indicates that it was played live only twice). “Boots of Spanish Leather” has persisted as one of the best folk songs that he ever wrote, and “Lonesome Death of Hattie Carroll” is, by far, the best topical song of his career.

Interestingly, Times marked the conclusion of a lot of these songs. Dylan played “With God on Our Side” for the first at the Town Hall show, but he rarely played it subsequently (only thirty times in his career), and “Only a Pawn in Their Game”, which he played at the March on Washington” he only played nine times live.

Times continues a run where Dylan ended his albums with pretty weak material. “Restless Farewell” was added late. Dylan recorded nine takes of this at the last session for the album on Halloween 1963. Robert Shelton sees the song as a direct response to the unfavourable Newsweek article about him. Dylan only played it live twice – it seems that classic songs are rarely written as angry responses to Newsweek.

Here’s “Restless Farewell” from the CBC show Quest in 1964. 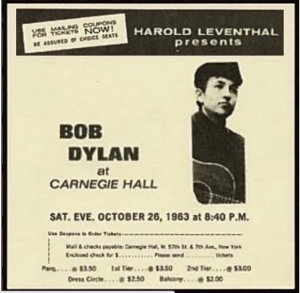 Dylan’s last major concert of 1963 was at Carnegie Hall on October 26. It was the first time that his parents had seen him perform live since he had left Minnesota. It was a good show, but not as strong as the Town Hall show from earlier in the year. It is clear from the crowd reactions that he was now drawing a different, younger crowd to his concerts. Dylan-mania was taking off. No folk crowd “shushing” on this one.

The show came in the middle of the recording sessions for The Times They Are A-Changin’, and that is the song with which he kicked off the show. I’m quite interested in the way that Dylan incorporated new songs into his sets, often months before they were recorded and released on albums. He seems to have shed his early songs quite quickly, and was constantly moving on to the next thing whether the audience was ready for it or not. It makes this year by year approach to listening to him occasionally odd, as when an album comes along I’ve already heard about a half dozen live versions or demo versions of many (but not all) of the songs.

The Carnegie Hall show was originally intended to be released as a live album (Bob Dylan in Concert), but that never came to fruition. Columbia has done a rather confusing job of releasing this material. Two songs (“Who Killed Davey Moore” and “Talking John Birch”) were released on the first Bootleg Series. Scorsese used “Hard Rain” and “When the Ship Comes In” so they are on Bootleg Series 7. Six songs were released on the Live at Carnegie Hall EP in 2005, which means that ten of the nineteen songs are legally available in the US. The other nine were released in Europe for copyright reasons on the 50th Anniversary Collection. If you want to listen to the concert straight through you have to assemble it for yourself, and, worse, the applause is faded out so there is a sense that you’re missing something. Ideally this concert would be given a much better presentation.

Dylan would have a rupture with his family around this time because of their participation with an unflattering article on him in Newsweek in which they contradicted a lot of the self-mythology that had built up around him. In November, of course, John F. Kennedy would be assassinated, and this would have a major impact on Dylan – and the rest of the folk community – and seems to have helped push him further away from political songwriting. He would emerge in 1964 with two new studio albums rather than this as a live album, and they would mark the end of the second phase of Dylan’s career, and the beginning of the third. The mutations just came faster and faster.