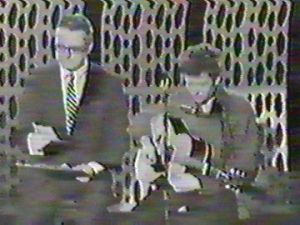 You really should watch Bob Dylan’s appearance on the Steve Allen show from February 25, 1964 (shortly after he appeared on CBC’s Quest). Not just for Dylan’s performance of “The Lonesome Death of Hattie Carroll”, but for how utterly, totally bizarre the interview is. Allen introduces Dylan, throws to commercial, comes back, reintroduces him, reads a review, asks him a question, reads one of Dylan’s poems, and then asks him about Hattie Caroll – suggesting that Dylan tell the audience about her, which, of course, is what the song does. Allen seems totally lost: “Well, I imagine the song tells it’s own story,” he says. I think talk show prep left a little to be desired in the early 1960s.

What is striking, though, is how hard Allen pushes him not just as a singer-songwriter or folk star, but very consciously as a poet. Allen calls him a poet, quotes a review that calls him a poetic genius, and then actually reads Dylan’s poetry aloud himself. By 1964 Dylan was self-consciously positioning himself this way, not simply in the way that he was using Rimbaud-ian imagery in his songs, but through the inclusion of things like “11 Outlined Epitaphs” on the back cover and insert on The Times They Are A-Changin’ (my insert, by the way, is gone from my vinyl copy – I had to read the text online).

Dylan wrote poetry earlier – he ended his Town Hall concert in 1963 with “Last Thoughts on Woody Guthrie” and apparently wanted to include that reading on a potential live album in 1964, which became a stumbling block with his label. I have a tough time gauging his non-musical verse. It can be quite evocative, but it mostly leaves me cold in comparison to his songwriting.

There is an argument to be made (and it has been made) that the collapse of poetry as a popular art form owes a great deal to Dylan and Paul Simon and Leonard Cohen raising the stakes in pop music by incorporating poetry into their songwriting. The turn towards difficulty, abstraction, and conceptualism that marked poetry over the past half century can be read as a reaction to the appropriation of lyrical poetry by pop music. As a certain kind of poetry moved into the university’s creative writing programs, popular verse moved into the musical realm. The combination of music and poetry had been one of the goals of the Beats, of course, and when Dylan and his colleagues began to achieve it, it forced the poetic avant grade to move towards non-expressive forms. I’m simplifying horribly, of course, but it is striking how far the cutting edge of poetry in the late-1960s and after would move away from the types of things that Dylan and Simon were able to write.

Every year now Dylan is mentioned as a potential Nobel Laureate for his poetry, by which the critics usually mean his songwriting. It always seems like a long shot to me, but I do think that his impact on the world of poetry has been profound – not simply because people followed his example, but because an even greater number of poets ran from it.

On New Year’s Day I hauled all of my vinyl Bob Dylan albums out of storage. We don’t own a turntable at the moment, but I thought it would be a good start to the year to go out into the garage and track them all down. As they’ve been through a number of moves – and since we don’t actually play them – they’re no longer in any order, and I had to flip through all of the boxes. I was surprised not to find a copy of Another Side of Bob Dylan, the second album that he released in 1964. I figured maybe it got lost somewhere along the way.

Three weeks later I know why I didn’t find it: I had never, ever, listened to this album before Sunday when I started playing Dylan’s 1964 output. I am completely positive that there are songs on this album that I had never heard in my life.

I don’t think I was expecting that.

Now I’m trying to figure out why I would have skipped it. The most likely reason is that buying albums in the 1980s was a bit hit and miss, and it’s possible that I never saw it for sale when I was buying the other Dylan albums of the period. Of course, it’s also possible that this was a conscious decision. The album doesn’t have very many of his “big” songs, and the ones that are on here (It Ain’t Me Babe; All I Really Want to Do; To Ramona) are all on Biograph in one version or another. It’s possible that, owning Biograph, I felt no completist need to pick up an album for things like Motopsycho Nitemare.

Having listened to it a few times now, I don’t feel like I was missing all that much. Dylan recorded this in a single day (June 9, 1964) in very few takes (To Ramona and All I Really Want to Do are both the first and only takes recorded of those songs). The good songs here (which would also include Chimes of Freedom) are all really good – but few of these versions are the really great versions. In many ways, this feels like a bootleg that has been released. You can hear Dylan laugh during his performance on two different cuts. The whole thing feels rushed and premature. One of the most remarkable things about it is that Mr. Tambourine Man was recorded (twice) during this session, but was left off the album. That one of his biggest hits was pushed back to the next album (after becoming a sensation for the Byrds) is indicative of how little thought seemed to go into the track selection.

The album is the transition into Dylan’s rock mode. It’s not a rock album – Dylan plays solo on all of the songs (and solo piano on Black Crow Blues) – but the best versions of every one of these songs is a live rock version. The album didn’t do well for him – he was still a folksinger in the eyes of the public – and these songs were far too personal. It never even cracked the top forty. It also contains a high number of duds: Black Crow Blues, I Shall Be Free No. 10 (which is dreadful), Motorpscyho Nitemare (same), and Ballad in Plain D, which might be the worst thing that Dylan ever recorded (I want to say more about that tomorrow). All four of these songs have never been played live, which shows how little faith Dylan had in them.

All in all, it’s a bit of a tough album to sit through. The best parts simply remind me of better versions, and the low points are really quite low. Not sure how my teenage self knew that, but I saved myself ten dollars that I probably would have regretted spending.

“All I Really Want to Do” was the first song on the album. Here’s the version from Newport 1964: