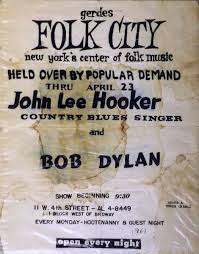 Dylan left quite a large collection of recordings in 1961, even before he signed with Columbia. His biography indicates that he left university in Minneapolis in December 1960, and arrived in New York shortly after, but that he didn’t make his way down to Greenwich Village until February 1961 (something that he says onstage at Carnegie Hall later in the year). Robert Shelton’s biography, No Direction Home, is quite interesting about this period (Shelton was there, writing for the New York Times about the folk scene), and particularly good on the subject of Dave Van Ronk and Jack Elliott as influences and mentors who helped broaden Dylan’s influences.

The Gleason Tape, recorded in Februrary 1961, is a remarkable document. Dylan was only nineteen years old at the time, and he sings a collection of folk standards, but even more Woody Guthrie songs. Obviously, Dylan’s debt to Guthrie is enormous, but the extent of it here is really striking. The Beecher Tape, from a trip back to Minnesota and Wisconsin in May, is better, but is similar. Dylan worked the coffee houses and at Gerdes Folk City in the interim, and his craft shows a great deal of improvement. His repertoire is expanded and the performances are generally stronger, but there is still a ton of Guthrie here, including Car Car, which is a fun song to play but makes me cringe whenever I have to listen to it. More than half of the Beecher tape is Guthrie covers.

Robert Shelton writes: “The latter half of 1961 changed Dylan from a provincial folknik into a music professional”. This seems clear from the recordings. I have scattered songs from the WRVR Hootenanny Special and from the Gaslight Cafe, and almost everything from the second half of the year is stronger than from the first. Having only recently turned twenty, the speed with which he was professionalizing himself was remarkable. By the time he recorded “The First McKenzie Tape” in November, he’d played Carnegie (Chapter) Hall and signed to Columbia – he has begun segueing into the performer that will release his first album, and he plays a lot of the same material. That’s for next week, though.

The song that kills me from this period is “I Was Young When I Left Home”, which was part of the Minnesota Hotel Tape (and was released as a bonus track on Love and Theft and also on the No Direction Home soundtrack). I first heard this as a teenager because the Minnesota Hotel Tape was included on the ten-album Zimmerman: Ten of Swords bootleg. I thought that this was the best thing on those first few disks, and I still do. I am pretty sure that I always thought that this was a traditional folk song (it was only when I started learning the banjo twenty years later that I realized that it’s based on “900 Miles”). Listening to it now it is almost unbelievable to me that it was written by someone only twenty years old. Its use of the past tense, and Dylan’s haunting vocals, make it seem like it has been around forever. It’s one of my absolute favourite Dylan pieces – possibly due to the droning of the steel strings that he’s finger-picking (sounds a bit like a banjo tune!). It’s the most wizened song you’re ever going to hear from someone so young, and the earliest recording that I’d put on my own “Best of” collection. I couldn’t quickly find a copy of it on the web, but here is Marcus Mumford covering it from the great documentary Another Day, Another Time, which is available on Netflix (at least in Canada), and which presents a concert at Town Hall in support of the Coen Brothers’s film, Inside Llewyn Davis:

When I think about where I was when I was that age, and the skill set that was required for him to write a song like that, well, I can’t relate!