I put off watching Murray Lerner’s documentary, The Other Side of the Mirror: Bob Dylan Live at the Newport Folk Festival, because I was trying not to skip ahead and the film covers all three of his earliest Newport appearances (1963, 1964, and 1965) in just ninety minutes. As it turns out, I could have risked it – Lerner separates all three years into clear sections. Of course, watching it that way would have been to miss the point entirely.

The Other Side of the Mirror is a remarkable film. The transformation of Dylan over the course of just two calendar years – reduced here to an hour and a half – is nothing short of startling. The film opens with Dylan in a work shirt sitting on stage singing “North Country Blues” surrounded by Doc Watson, Clarence Ashley and Judy Collins (none of whom are identified – there is no voice over and no titles). He’s the great young hope of the folk movement already, joined by Joan Baez for “With God On Our Side” (which nicely segues into an evening performance of the same song by the same couple). “Who Killed Davey Moore?”, “Only a Pawn in Their Game” and other earnest songs follow. The year concludes with Dylan leading Baez, Pete Seeger, the Freedom Singers and Peter, Paul and Mary in a version of “Blowin’ in the Wind”. He was clearly a star on the rise, and he took control of the festival. 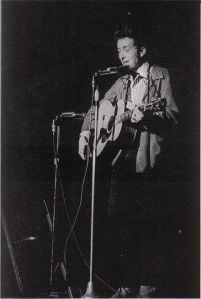 The 1964 section opens with him performing the as-yet-unrecorded “Mr. Tambourine Man” on a daytime stage in front of Pete Seeger. Already he was changing the definition of folk music. The section ends with a joyously smiling Dylan singing “Chimes of Freedom” to a roaring crowd – they simply refuse to allow Peter Yarrow to introduce the next act (poor Odetta…) chanting “We Want Bob!” while Yarrow desperately tries to tell the crowd “We’re sorry but that’s all there is”. Here Dylan was everything that they could have ever wanted in a folk star.

For 1965, we begin with an afternoon performance of “If You Gotta Go, Go Now”, a jokey song that generally got big laughs in Dylan’s 1964 performances. He recorded several rock-ish versions for Bringing It All Back Home, but none of them made the album. He also does acoustic versions of his new material (“Love Minus Zero/No Limit”) before heading into the epoch defining evening set. Dylan looks likely a totally different person now – not just because of the leather jacket and shaggier hair, but he simply looks older, more mature, more sure of himself.

Dylan and the Butterfield Blues Band (minus Paul Butterfield) did three songs that night: an extremely good version of “Maggie’s Farm”, “Like a Rolling Stone” (which had just been released as a single) and “Phantom Engineer” (the last, sadly, is not on the film) before being booed off the stage. You can read all you want about the show, and all the mythology that surrounds it, but it really is necessary to hear for yourself the booing. Revisionists have argued that the crowd was reacting to a bad sound mix – but that mix was nowhere in evidence in the recordings. It’s the music that they hated.

(I must add: In No Direction Home Pete Seeger swears that it was the mix that was the problem, not the band. As I believe that Pete Seeger is the greatest living American, I am obliged to at least imagine that he wouldn’t lie to me about that.)

Pity poor Peter Yarrow, desperately trying to calm the crowd again after Dylan leaves the stage – wiping flop sweat from his eyes, assuring the crowd “He’s gone to get an acoustic guitar”. He plays “Mr. Tambourine Man”, the 1964 novelty, to great appreciative applause from the crowd, who clearly feel that they have defeated his rock and roll intentions. That version of Dylan, already long gone now, gives them just two songs. He wraps his folk career up with a lamenting, heartfelt version of “It’s All Over Now, Baby Blue”. I have to say, if I’m ever chased off stage by an audience that just doesn’t get what I’m trying to do, I hope I have a comeback that is one billionth as pointedly sharp as this one. It’s a song meant to break your heart and nothing could have better put that crowd in its place. Lerner cannily ends his film with an image of Dylan’s abandoned mic stand as the crowd roars its approval of his performance. Winning the battle, losing the war.

The whole thing is astonishing, particularly if, like me, you’ve spent the last three weeks listening to these recordings. The difference between hearing and seeing is so important. While Dylan and Baez sing “With God On Our Side” three times here, it is only by watching that we see the change in Dylan’s demeanour – the smile that crosses his lips in 1964 that tells you he doesn’t really believe it any longer. It’s the smile of a young man who already seems to know that he’s reached the end of this particular line.

What is amazing about Dylan’s folk period is that it lasted only to July 1965. Four and a half years as a performer, and he completely changed the entire scene. His insistence on personal expression – at the expense of tradition – fundamentally reset the game. His performance of “Chimes of Freedom” in 1964 changed it just as much as the appearance of the Butterfield Blues Band did the next year. Dylan didn’t introduce the concept of stardom to folk music, he just perfected it. The Other Side of Mirror shows just how quickly he passed through and out of the scene.

Dylan didn’t perform at Newport again for thirty-seven years. I’ll talk about that in as many weeks. Until then, “It’s All Over Now, Baby Blue”

One thought on “Bob Dylan at the Newport Folk Festival”