Bob Dylan’s role in the March on Washington (August 28, 1963) was a minor one, though it profoundly shaped the way that he was understood as a singer-songwriter, and as “the voice of a generation”. Without Dylan, the March would still be remembered as one of the key moments in American postwar history for King’s “I Have a Dream” speech and for the enormity of the crowd and the righteousness of their cause. Without the March, Dylan’s image would have been significantly different. Interestingly, however, Dylan only rarely played such politicized events after this one – it does not seem to be something that suited him.

The best that I can tell, the folk song portion of the event was the fourteenth thing on the schedule (King was sixteenth, so Dylan’s performance was near the end of the day). Mahalia Jackson and Marian Anderson both sang, and then Joan Baez, with whom Dylan had been touring during the summer, sang “We Shall Overcome” and “Oh Freedom”. The two of them sang “When the Ship Comes In” and Dylan did “Only a Pawn in Their Game”, which was an interesting choice insofar as the lyrics suggest that Byron de la Beckwith was not the main reason for the death of Medgar Evers. Dylan’s suggestion of a larger social cause – something that he stumbled while explaining to Studs Terkel in their interview – is an awkward fit for the event. Peter, Paul and Mary also played at the event (“If I Had a Hammer” and Dylan’s “Blowin’ in the Wind”), as well as Odetta. The whole folk section of the day’s event ended with Len Chandler leading “Keep Your Eyes on the Prize”, the song that was borrowed as the title for a remarkable PBS documentary about the civil rights movement. 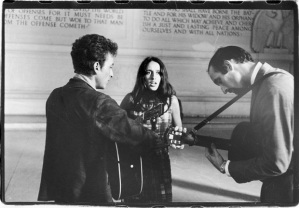 Dylan’s place in the history of the event was a minor one, but it helped cement the relationship between the new folk scene and the civil rights movement. For some fans it helped lay the foundation for the sense of betrayal that they would feel as his music began to change by the middle of the next year.

There is a tremendous video on YouTube of the musical performances from that day, plus footage from the crowds. It’s well worth watching in its entirety. Dylan seems nervous in front of the crowd, while Baez is so confident as she strides in to provide harmonies. Do yourself a favour, watch the whole thing: