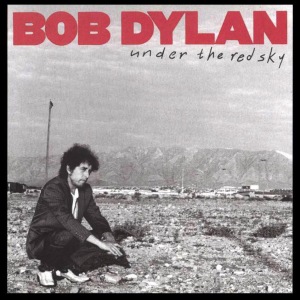 I own a copy of Under the Red Sky on vinyl. It is the most recent album that I can say that about. I have no idea how or why I have this – I think that it was probably given to me by someone. It has all the marks of having never ever been played.

Under the Red Sky is commonly regarded as the astonishing crash back to earth after Oh Mercy – the return of the half-assed Dylan who is just sort of hacking stuff out for no good reason. I don’t think that the album is awful, but it is true that it really isn’t any better than Knocked Out Loaded or Down in the Groove. There are a couple of worthwhile efforts here, but for the most part it is completely forgettable.

If I had been paying attention to Dylan at this point, I’m sure I would have shared in the disappointment of this album. It is chock full o’ guest stars (George Harrison, Stevie Ray Vaughan, David Crosby, Elton John, Slash….) and was produced by Don Was, who was a hot commodity at the time (working with Elton John, Iggy Pop, Bonnie Raitt, and the B-52s). Some critics, notably Robert Christgau, really liked this album. One thing I have learned so far this year is that if Christgau says something is white, I’m positive that it’s black – we could not disagree more fundamentally on Dylan (I just watched a documentary about Dylan’s career in the 1980s and Christgau is in it and every single time he said something I disagreed with it).

Two of the songs here – “Born in Time” and “God Knows” – were left-overs from Oh Mercy. Not surprisingly, I would argue that they are two of the three good songs on this ten song misfire. Let’s take a look:

It’s not his worst album by any stretch of the imagination, but it is half-assed. A genuine retreat from what he accomplished only a year ago with Oh Mercy.