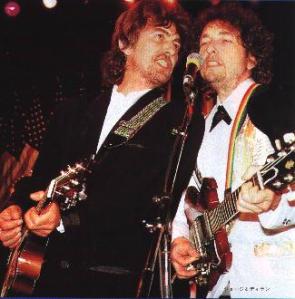 Bob Dylan kicked off 1988 by getting inducted into the Rock and Roll Hall of Fame in Cleveland. He was part of the third class inducted. The first class had been primarily 1950s-era stars (Presley, Holly, Berry, Domino, Little Richard….), while the second class was primarily Motown (The Coasters, Aretha, Marvin Gaye). Dylan was inducted the same year as The Beatles and the Beach Boys, and the Supremes.

I don’t remember watching the show if it was broadcast in Canada. I supposed that it probably was, but I definitely missed it. The Hall itself has uploaded some videos from the evening to YouTube. It seems like they don’t have the broadcast rights, because the videos are all shot from behind, so you can see everyone’s back. They eventually shift to the front, or swish around looking for people in the crowd.

The Dylan segment was kind of painful. Bruce Springsteen, clearly nervous, did the induction. He does, at best, a mixed job of it. I thought it was nice of him to praise Dylan’s contemporary work, but he didn’t really get the point across. He does seem to be at a loss as a public speaker. I’ve certainly seen him do much better later in his career.

Dylan’s speech is a big nothing. He gives what seems to be genuine thanks to Little Richard, makes a jab about, presumably, another speech that went awry, and that’s about all there is to it. It does not seem to have been an important night in the life of Bob Dylan.

At the end of the show they got everyone up on stage and they played “All Along the Watchtower”. Strong contender for worst ever version of this particular song. Just so half-hearted and unprepared.

It seems to me that the Hall of Fame shows eventually got a lot better, but this is pretty much strictly amateur hour. I’ve never been to the Hall of Fame (nor to Cleveland generally). I’m not sure that these clips really help sell me on its importance….