Here’s one that leaves me a bit befuddled, largely because Dylan and Columbia can be so comprehensive about wiping the web of Dylan videos.

The major Dylan output of 1991 was the triple-CD, Bootleg Series 1-3: 1961-1991, a major opening of the vaults that led to a re-examination of Dylan’s legacy. I’m going to write more on that album later this week. To promote the album, a single was released: “Series of Dreams”. This was a song recorded in New Orleans for Oh Mercy, but which was left off the final album. It’s difficult to see why that was, since it was better than a lot of the material on that album. Apparently producer Daniel Lanois thought that it should be the lead track, but Dylan overruled (Lanois’s support may stem from the fact that the song has more Lanois-ish touches than most of the rest of the album). I think that this is a really strong song. It also appears on Greatest Hits v3 and Bootleg Series 8. Not too shabby for an almost unreleased song!

In support of the single and the album, a video was made. I never saw it when it came out, and now I’m not 100% certain that this link (Vimeo and WordPress don’t get along – click through) is the actual video I think it is, and I’m going to write under the presumption that it is.

Anyway, it’s the best Bob Dylan music video to date. It’s a pretty simple concept – they simply edited a whole bunch of old footage from Dont Look Back, Eat the Document, Renaldo and Clara and elsewhere and then process it with a whole bunch of effects. It sounds awful, but it’s not.

You can see the video without any effects here, so this is what they started with:

That’s all fine and well, but the effects add a great deal. The insertion of old photos makes it a lot more visually interesting and dynamic. There are nice little touches – my favourite comes at 3:43 when Dylan is in a cab and they superimpose the face of Lenny Bruce on the other passenger, a nice nod to this piece of lyrics from the song “Lenny Bruce”:

I rode with him in a taxi once

Only for a mile and a half, seemed like it took a couple of months

Anyway, this was the first Dylan video to completely capture my attention and imagination. It is both a good song and an interesting video. Recommended! 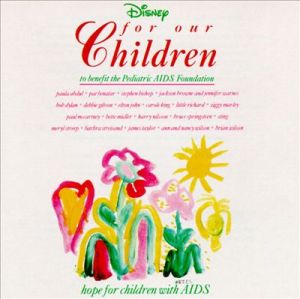 Did I mention that 1991, the Dylan week that we’re doing right now, happens to have included his fiftieth birthday? Well, it did!

How did Dylan celebrate that occasion? I have no idea. Not with a public event of any kind. He didn’t play a concert – his second 1991 tour ended on May 12, and his third tour of the year opened in Rome on June 6. Maybe he was on a tropical island somewhere?

Dylan did release a song that would allow writers to piggy-back onto his half-century birthday though, and it was a good one! He contributed a version of “This Old Man” to the For Our Children benefit album in support of the Pediatric AIDS Foundation (others lending a hand included Sting, Paul McCartney (“Mary Had a Little Lamb”!), Bruce Springsteen, Bette Midler, Elton John, and Barbra Streisand). Despite its all-star cast of artists, I have absolutely no memory of this album being released, probably because it is a collection of songs for children, and I didn’t have any at that point.

This is a good version of this, and makes good use of middle-aged Dylan. The harmonica playing is nice, and musically it is quite minimal. I wish he would do more things along these lines (I am currently listening to a compilation of acoustic songs from his 1991 London concerts and loving it in all the ways that I am hating his current live work when he is backed by a full band).

One other video worth sharing at lunch is this one by Loudon Wainwright III, which celebrates Dylan’s fiftieth by noting the large shadow that he cast on singer-songwriters like Wainwright and Springsteen. I went a little Wainwright nuts a couple of years back when I was building a deck – just put him on endless repeat until I couldn’t take him any longer. This is a cute song, as many of his are:

Sometimes in life you spend seven months writing about a blog about Bob Dylan, and then you read a single magazine article and think “Well, damn, that was exactly what I was hoping to say, only better”. It’s a despairing moment.

In 1991 columnist and essayist Joe Queenan set out to do an interview with Bob Dylan on the occasion of the singer’s fiftieth birthday. After jumping through a number of hoops (hilariously detailed in the piece itself), he gets a ludicrously mono-syllabic interview with Dylan. When he writes it up for The New York Times, the paper of record rejects it (probably with good reason), and the piece winds up running in the late, great Spy Magazine.

A quick word about Spy: I adored this magazine for a few years at the end of the 1980s and the beginning of the 1990s. There eventually came a moment when they completely lost their way editorially and became a pale shadow of what they once had been, but until that time they were an astonishing culture industry wrecking ball, spewing bile on celebrity culture of all kinds. There are pieces from that magazine that I still recall with total clarity a quarter of a century later (on David Mamet as a playwright for wealthy Americans with short attention spans; the pieces on Donald Trump; an astonishingly great piece covering the rescue of those whales that were trapped in ice that still causes me to laugh years later just thinking about it). At its height, Spy was awesome.

Queenan fits the Spy mold pretty darn well. There are passages in the piece that are just brilliant, and I can’t recommend it to you enough. You should wander over to Google, which has now archived all of Spy, and read it yourself (hopefully this link works, if not it is in the August 1991 issue, beginning on page 54).

Queenan’s take on Dylan is remarkably simpatico with mine, right down to this list of albums post-motorcycle crash: One that is equal to Blonde on Blonde (Blood on the Tracks), three worth buying (John Wesley Harding, Desire, Slow Train Coming), and three worth thinking about buying (Shot of Love, Infidels, Oh Mercy). That final phrase, I wish I had written that. (Although, he underrates Desire).

I don’t want to just plagiarize all of his good bits – seriously, you should go read the piece. But I will note that it sheds some light on a couple of posts from last week.

First, on the West Point show: Dylan is hilarious here. Queenan opens the piece with that show, and all of its incongruities. He makes a huge deal out of it. Then, when he talks to Dylan, the singer actually says “Uh, the West Point show … was that before New York?”. He can’t be nailed down on the oddness of playing that venue, and he just keeps insisting that his recollection was that it was an enthusiastic crowd and there were problems with the set-up. He completely no sells the collective trauma that a certain generation of fans, including Queenan, seemed to have had with that show.

Second, on the Grammys. Dylan simply explains away the performance by suggesting “the flu greeted me that morning in a big way. All my drainpipes were stopped up. Those kinds of things just happen to me….”. And why that particular song, “Masters of War”? Dylan: “We just did that one… You know, war going on and all that”. Sure. And all that.

As an interview, it is one of Dylan’s worst. As a piece of snark, it is nearly unparalleled. Check it out!