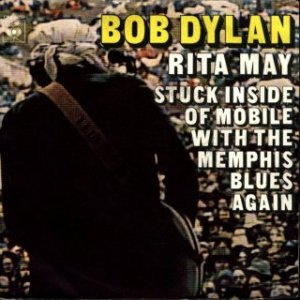 One of the few things Dylan did in 1977 was release “Rita May”, a song recorded during the Desire sessions but left off the album. The song itself is a silly 1950s style rock and roll tune that was covered by Jerry Lee Lewis in 1979, appropriately because it sounds like something Jerry would have sung a quarter century earlier. There’s not much to this one. It is exactly as it promises to be, and that’s about it. Not very Dylanish.

It’s a bit of a poser for me. The cover for the single (above) clearly indicates that it is the b-side of the live version (shortened) of “Stuck Inside of Mobile With the Memphis Blues Again” excerpted from Hard Rain. The UK single cover (below) indicates the same thing, slightly more explicitly.

However, wikipedia insists that this was a non-album single (not a b-side) and there is this single sleeve that would seem to indicate that. So I’m not sure. One of the things that I find a bit odd about researching Dylan, given the vast mountains of information there is on the web about him, is how contradictory so much of this. Obviously, I could spend some time and figure this a-side/b-side thing out for my own, but it’s not like the song really merits the work. It is a useful reminder of not to trust much of anything that you read on the internet (or elsewhere) for face value, to check and double-check. It is also a good reminder of how much more obscure this kind of thing becomes as you move back in time – this is only thirty-five years ago and it’s not immediately clear, so imagine if it was 350 years.

Speaking of not trusting what you read, wikipedia offers these weasel words: “Some listeners believe that the lyrics of the song refer to writer Rita Mae Brown, who had complained of the lack of opportunities for casual lesbian sex.” To their credit they actually cite Dylan Who’s Who for that insightful bit of guesswork. The fact that a) it’s not spelled “Rita Mae” and b) there is nothing in it to suggest that it is about a militant lesbian. I can’t imagine that Dylan ever thought, as Brown did, that heterosexuality was the root of all oppression. I can believe that he’d sing:

Rita May, Rita May

Laying in a stack of hay

Do you remember where you been?

What’s that crazy place you’re in?

I’m gonna have to go to college

’Cause you are the book of knowledge

Dylan’s site says that he only performed this once, in New Orleans in 1976. It’s a good performance, but it’s not on video. So here’s The Killer instead: