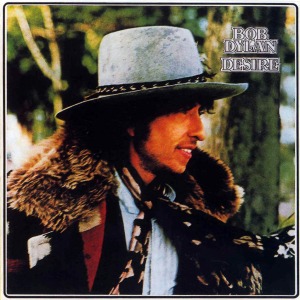 Here’s a passage that basically sums up Desire for me. This is from Larry Sloman’s 1978 book, On the Road With Bob Dylan, about his exploits as the Rolling Stone reporter tagging along on the 1975 portion of the Rolling Thunder Revue. At this point in the Hunter Thompson-esque odyssey he is holed up in Maine in a hotel, convinced that the Dylan entourage has sabotaged his rental car to keep him from getting to Quebec City. Strung out on amphetamines he phones Mike Bloomfield, who was Dylan’s guitarist when he first went electric. Bloomfield, and he asks him what he thinks of Dylan’s later albums. Bloomfield argues that the only two well-produced Dylan albums are Blonde on Blonde and Nashville Skyline:

“As far as I can see an album has never come out by Bob that was musically equal to the content of the songs or they lyrics. And strangely enough, except for rare occasions, I would rather hear Bob sing his songs than cover versions, but I’d rather hear Bob singing his material better produced”

Elsewhere in the book, Sloman reports that he suggested to Dylan that he simply re-record the entirety of Desire with the band that was on tour, because they were so much better at the songs now than they had been when they recorded the album. That was a great idea by Sloman that, of course, had no chance of happening.

Here’s the thing: Desire is the Bob Dylan album with the best overall collection of songs. Song for song, ton for ton, Desire can out punch any other Dylan album. But here’s the other thing: Desire is not Bob Dylan’s best album, because almost every single song on the album sounds better elsewhere (“Joey” might be an exception here).

One of the interesting things about Biograph is that it was assembled by a Desire fan. They included three songs from those sessions – “Abandoned Love”, “Isis” and “Romance in Durango” – but, importantly, nothing actually from the album itself. “Abandoned Love” was, I noted, inexplicably left off Desire, despite the fact that it would have been the album’s best song. Biograph uses live versions of the other two songs, and they are great. I actually have trouble listening to “Isis” on the album because I always mentally expect to hear Dylan say “This is for Leonard…. If he’s still here”, which is how he introduces it on the live version on Biograph, which is the version I always listen to. (from the Montreal show in 1975 – the Leonard is, of course, Leonard Cohen. That show is incredible, by the way).

So, Desire is an album full of songs that I like better when they’re not on Desire. But what a collection of songs. “Hurricane” and “Mozambique” I’ve already addressed, and both are great. “Isis”, the second track, is a top ten Dylan song for me, probably even top five just for the Montreal version. It’s perhaps my second favourite Dylan story song, and, live, this verse always kills me:

“One More Cup of Coffee” and “Oh Sister”, the duets with Emmylou Harris, are really solid mid-1970s Dylan dirges. But the best of these is “Sara”, Dylan’s most personal song since the execrable “Ballad in Plain D”. “Sara” is a beautifully constructed song, with the verses looking back to earlier moments in their now doomed relationship. Sara was apparently there live when Dylan recorded it, but it may have been too little too late. The line in which he references “Sad-Eyed Lady of the Lowlands” is sort of a minor classic, although his rhyming “help” and “kelp” always strikes me as a clanger.

There is nothing that I don’t like on this album, which might be a first for me. It was #1 in the US for five weeks, and was one of Dylan’t best-selling albums. I think, for me, this is really the peak – not the album itself, but the tour that supported it and many of the versions that can be found. An unbelievable collection of songs, but not the best album.