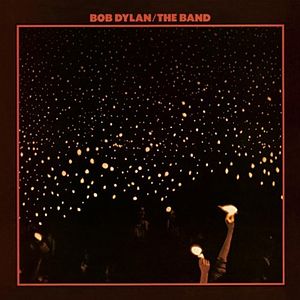 I’m linking below to a YouTube video that has, inexplicably to me, not been taken down. It’s almost two hours of Dylan and The Band playing in Largo, MD on January 15, 1974 (misidentified as Landover by the uploader). It’s a crowd recording – you can hear people talking about Robbie Robertson before the first chords of “You Go Your Way (And I’ll Go Mine)”. Quality is so-so, but it’s a good show and it gives you a strong sense of how the 1974 tour sounded in its early stages. Dylan played “Wedding Song” at this show (1:13:45), the third time he’s ever play it (he only did so nine times in his life, so it’s pretty rare). This was also the last time on that tour that he played “I Don’t Believe You (She Just Acts Like We Never Have Met)”, which is too bad because I quite like it (starts at 14:20).

I’ve really enjoyed listening to this tour all week – it has completely reinvigorated my enthusiasm for this project, which was never really flagging anyway. The tour has some problems, but it is the arrival of a Dylan sound that I really liked and would have liked to have seen continued even longer. Some shows, obviously, are better than others, and it does tail off a bit at the end. I think that this Largo show is quite good – it is still early enough in the tour that the songs don’t sound over-rehearsed. Dylan powers his way through a lot of the material during a lot of these shows. While he had played very large venues in the past (Isle of Wight, Madison Square Garden for the Concert for Bangladesh) this was still something of a new experience for him. In 1966 he played venues for a few thousand at the most, and here he was playing a lot of arenas. The shows called for power over nuance. A lot of this was technologically dictated – amplification being what it was, and hockey arenas being what they are acoustically – the ability to shape sound in those spaces forty years ago left a lot to be desired (often they still do – the last time I saw Dylan live at the Saddledome in Calgary I thought the sound was terrible, but that’s typical of the Saddledome).

Before the Flood isn’t necessarily the ideal record of the 1974 tour, but it is a very good one. Recorded primarily at the Los Angeles dates at the end of the tour, it may illustrate a certain road-weariness. Dylan is in full yelling mode on a lot of the songs, but the sound mix is really good and the band is very tight. The double-album gives eight tracks to The Band and thirteen to Dylan (most with The Band). It is a genuine collaboration, much as Planet Waves was (which is credited on the cover as Bob Dylan/The Band). It would have been interesting to see where that relationship might have gone had The Band stayed together longer than they did.

As there is a certain sameness to a lot of the tour, I don’t feel a need to track down every bootleg ever (though they are out there). What I would like ideally would be a tour collection that has a good version of every song that he played on the tour (just around fifty), but I’d likely have to curate that myself. Songs like “Hattie Carroll”, “It’s All Over Now, Baby Blue” and “Song to Woody” were played only twice on the whole tour. “To Ramona”, “Desolation Row”, and “Mr Tambourine Man” were played only once.

The big four songs – played at all forty shows – were “Lay Lady Lay”, “All Along the Watchtower”, “Ballad of a Thin Man”, and “Like a Rolling Stone”. “Knockin’ on Heaven’s Door” and “Just Like Tom Thumb’s Blues” were played 39 times each. For some reason “Just Like Tom Thumb” doesn’t end up on Before the Flood, which is a disappointment.

Overall, great tour, and pretty great album. We’re well into the peak Dylan phase. By the way, the proximity of Washington makes the “even the president” pop (1:25:10) exceptionally large in the video below.

One thought on “Before the Flood”