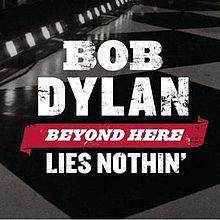 That is something that I never anticipated I’d write on this blog.
In 2009, Bob Dylan took a dramatic turn with his music videos. Having mostly been involved in pretty terrible videos for a couple of decades, Dylan (or his people) did a good video for “Dreamin’ Of You” in 2008. In 2009 they hired Australian director/stunt man Nash Edgerton to direct what is now his first of three videos for Dylan. In a very good interview with Pitchfork Edgerton noted that he not only never met Dylan (he will later on) but he was played the song once over the phone as he decided whether or not to take on the project. Hyper-protective Dylan and his hyper-protective record company.
So, Edgerton made the video, and I watched it for the first time today. My heart is still racing a little bit. I’m not going to kid you, this is a truly disturbing music video. Truly disturbing. Shocking, even. It has strong Tarantino overtones and probably is not something that everyone should watch. Dylan has allowed his work to be taken to a VERY dark place.
If you can stomach it, it is an exceptionally well-crafted video. When the sound drops out for an extended period we were into a territory that I’d never seen anyone take a music video. The ending will righteously anger a lot of people, and it bothers me a great deal. Edgerton has uploaded this video onto his own Vimeo account, and he even responds (glibly) to questions there. I find his response about the ending very unsatisfactory, personally.
Looking at the lyrics, there is a large part of me that thinks Edgerton has simply amplified the subtext here a thousand per cent. It’s a dark song – the accordion parts and other music made me think that it should be used on a David Simon show, and, in fact, it was used as a teaser for True Blood (and in a second season episode). So perhaps I shouldn’t have been as shocked as I was, but there you are.
Proceed at your own risk on this one. I think “Beyond Here Lies Nothin’” is the best song on Together Through Life and this video is remarkable, but I don’t think I’m going to ever watch it again.
On preview, it seems that the YouTube version is not the director’s cut (it doesn’t have the section where the sound drops out). Check the Vimeo link for the full version.

2 thoughts on ““Beyond Here Lies Nothin'””