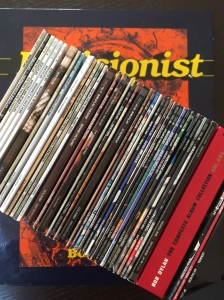 The final album that Bob Dylan released in 2013 was, appropriately enough, every album that he had ever released. In many ways The Complete Album Collection was an impetus for this blog – something that would give me an organizing structure and a theme. At the same time, the blog was an excuse to buy the CD set and a way to force myself to listen to Dylan albums that I had not previously bothered with, and might have skipped again. I had a strong sense that, absent the lunacy of this blog, I was setting myself up to buy an expensive package of CDs that would sit on the shelf. I have lots of DVDs and books that have, unfortunately, done the same.
I got a lot of use out The Complete Album Collection – even though it didn’t ship to me until part way through the project. Each week I would put the new CD (or CDs) in my car, which is the only place were I have a CD player (talk about a rapidly fading technology….). I kept the bonus disc there all year round, only listening to those tracks as they arose, trying very hard not to skip ahead. Though I also had MP3 versions of all the albums (I cycle to work more often than I drive) and my phone syncs to my car stereo by bluetooth, I preferred the actual CDs. I do think that there is notable difference in tone, but that might be psychological.
The Complete Album Collection, of course, is about to become Incomplete with the February release of Shadows in the Night. I have taken a look on Amazon and have found no indication that that album will be released in a format compatible with my box set, which is vaguely upsetting. All of the albums in The Complete Album Collection come in their own sleeve, and they are numbered on the spine. I want a copy of Shadows in the Night that I can just slip right in there – there is ample space, but I’m not sure that I’m going to get that. Dylan’s website is no help on this front. I don’t want a jewel case and all that stuff.
Of course I knew when I bought it that The Complete Album Collection would never live up to its title, and as I’ve noted a few times it doesn’t do that anyway. While it does have the first CD release of Dylan, the album he never acknowledged, and it unites his non-Columbia material with the Columbia material, there are no Bootleg Series discs and a large number of singles and soundtrack contributions were omitted. The two disc bonus selection really probably should have been about four discs. That was an irritant.
This afternoon I put the lid back on my Complete Album Collection box set, and put the whole thing up on the shelf. For fifty-two weeks it has allowed me to trace the fifty-two years since Dylan released his self-titled debut album, one year per week. I’ve learned a lot more about Dylan this year than I think I even imagined that I would, but more interestingly I’ve learned a great deal about other aspects of the culture as well.
I went into this project thinking that Dylan was someone who constantly changed who he was. In recent weeks, listening to his more contemporary albums, I have been able to clearly see the through lines that unite his work across five decades. I’ve begun to think that it isn’t Dylan who was constantly changing so much as the world around him.
The one thing that most strikes me after listening and re-listening to all of this music (I don’t think that there is a single album in this box that I listened to fewer than seven times) is that I’m not really any closer to figuring Dylan out – to coming up with the grant unified field theory of Bob Dylan. People (me included) keep trying to put Dylan into a box of their own making; trying to find a simple explanation for what he does. In his 2012 Rolling Stone interview, Mikal Gilmore wants Dylan to talk about mortality (the last three songs on Tempest all have characters that come to their deaths). Here is how Dylan responds:
The people in “Frankie and Johnny,” “Stagger Lee” and “El Paso” have come to hard endings, too, and definitely it’s that way in one of my favorite songs, “Delia.” I can name you a hundred songs where everything ends in tragedy. It’s called tradition, and that’s what I deal in. Traditional, with a capital T. Maybe people have to have a simplistic way of identifying something, if they can’t grasp it properly – use some term that they think they can understand, like mortality. Oh, like, “These songs must be about mortality. I mean, Dylan, isn’t he an old guy? He must be thinking about that.” You know what I say to that horseshit? I say these idiots don’t know what they’re talking about. Go find somebody else to pick on.
After a year spent listening to Dylan, he may be right – I don’t know what I’m talking about when I’m talking about Dylan. But I’m trying
—
Happy New Year all, and thanks for reading! I’m going to continue through Sunday with a few thoughts about 2014 and a couple of notes about the blog in general, but this is, officially, the end of The Long and Wasted Year. 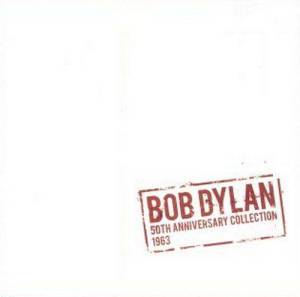 A couple of weeks ago I had dinner in Toronto with my friend Peter, who admitted to falling behind on this blog. Talk turned, as it has so often for me this year, to Bob Dylan. He asked me if I had complete recordings of the Town Hall Concert from 1963 and the Carnegie Hall show from October of the same year. He mentioned that one of his customers – Peter is a retailer – had unexpectedly brought him some CDs of this show, and he’d be happy to copy them for me. We checked my phone – more than half of its storage taken up with Dylan songs – and I told him that I did have a complete Town Hall, but not a complete Carnegie Hall show.
Just as at the end of 2012, at the end of 2013 Sony dumped a bunch of Dylan material into the European market in order to extend their copyright on it. This time they did it as a series of six LPs, and only 100 copies were made. It immediately became a hot collectible and wound up on the torrent sites. This set is a little better than the 1962 set and it has some interesting choices. Most of the material that had not yet received an official release was well circulated as bootlegs.
The set opens with unused outtakes and version from the sessions for The Times They Are a-Changin’. This stuff has been extremely picked over by the various Bootleg Series releases, so we’re now down to the items that have almost no chance of an official release. This is for the diehardiest of the diehards. It is followed by a Greenwich Village set from Gerdes Folk City, that I already had.
The Town Hall show takes up most of the second and third LPs. As I said, I had this already, but once again Sony has made it sound just that little bit better. The fourth LP includes five songs from the “second MacKenzie tape”. My version of that bootleg had thirteen, including a number of instrumentals. Perhaps there is a reason that they deemed some of the music not worthy of protecting. The sound quality here means that this is unlikely to get a commercial release anyway.
The set continues with Dylan’s songs from his interview with Studs Terkel, but not the interview itself, and the Bear Club show, which I already had. They include his performances from the March on Washington and from the television show Songs of Freedom (two songs that I did not have).
Finally, the set ends with nine songs from the Carnegie Hall show in October 1963. This was professionally recorded by Columbia for a potential live album that never came to be. It is now entirely available legally, although you have to do the work of putting it together on your own. Here is the complicated release history of this show, which included nineteen tracks.
Songs #3 (“Who Killed Davey Moore?”) and #5 (“Talking John Birch Paranoid Blues”) were released on the first Bootleg Series.
Songs #12 (“Hard Rain”) and #19 (“When the Ship Comes In”) were released on No Direction Home, the seventh Bootleg Series album.
Bizarrely, six songs were put out on the promotional EP Live at Carnegie Hall in 2005, bringing the total to ten. 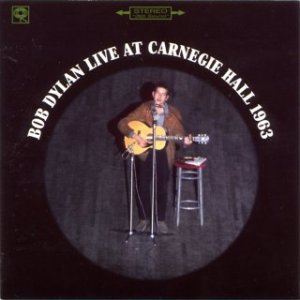 The remaining nine were put out on this release for the lucky 100 people.
Fortunately you can patch all this together on an iTunes playlist and listen to the whole thing.
I guess that they aren’t going to put this album out, which is a shame. The Bootleg Series has included a 1964 show and a 1966 show, so a 1963 one might not be forthcoming.
I’m happy to be able to piece this all together now, but the whole thing is like a metaphor for this blog – a lot of scrambling around to try to figure out how to get all the Dylan parts that I want!
Here’s “Seven Curses” from Carnegie Hall
Loading Comments...