I’ve previously written about Bob Dylan’s collection of sketches, Drawn Blank. I called the book “average”, “mundane, and uninspired”. So, imagine my surprise to have to revisit this work in 2008* all over again.
In late October 2007, The Drawn Blank Series opened a five month run at the Kunstsammlungen Chemnitz in Germany, and an almost 300-page catalogue of the show was published. The paintings were new versions of the material that I previously wrote about. Those pencil and charcoal sketches were transferred “by a special digital process to deckle-edged paper and painted by Bob Dylan using watercolours and gouaches applied in different thicknesses and to varying effects”. During the course of 2007 Dylan painted 322 such works and the museum chose to display 170 of them. Unsaid is that Dylan’s first museum show was of work that he had not created when it was scheduled, and given the lead time of hanging, that he did those 322 paintings in about eight months (given the October opening). Let’s also note that during those eight months Dylan performed three distinct tours comprising 67 shows (Europe, USA, Australia). He didn’t tour in the first couple of months of 2007, and it is certainly possible that he painted all 322 paintings during that time, at a rate of about five per day. I have no idea, but that wouldn’t surprise me.

What we’re looking at here is a transfer of old work to new paper, and then Dylan would do multiple versions. So there are three versions of “Guitar Player” here, all with different color schemes. Dylan is working over copies of earlier works, and he seems to be working quickly. His sketches are quick, and the paints applied to them are no less so. He uses large swaths of colour, generally sloppily applied.

Last week I wrote (a little) about Dylan and Warhol, and Warhol is an obvious influence here. There is a big difference between Dylan’s gouaches and Warhol’s silk-screens, but the effect of using the same mechanically-produced image and overlaying different colour schemes is quite similar. Unfortunately, Dylan doesn’t have Warhol’s colour sense at all. There are a lot of muted pastel colors here that I find really unattractive – colours from a Florida motel of the 1980s. Some of the paintings are quite garish (actually, that can also be said of a lot of Warhols…) and I find them generally unpleasant.
The catalogue, which is epic, includes three essays defending and explicating this work. I feel sorry for the authors, because this is sort of thin gruel to build an essay around. Frank Zolnner is reduced to platitudes (“Drawing is a form of remembering…”), while Diana Widmaier Picasso compares him to Picasso (her grandfather), Munch, and Matisse. Jens Rostock, who produces the best essay here, reaches for a wide range of comparators – Botticelli, August Strindberg, Oskar Kokoschka, Arnold Schoenberg, Paul Bowles, Jean Cocteau – none of which sheds much light on the actual work, partly, I think, because the work itself does not much lend itself to a fulsome discussion. The role of these critics is to situate Dylan in relation to the history of western art, which is a challenge with work that seems so rushedly casual. I hate to be cynical (well, no I don’t), but it is tough to see this as anything other than Chemnitz hoping to cash in on Dylan’s musical celebrity with a hastily convened art project. The critics do well to survive with their dignity intact.

Post-Chemnitz, the Dylan show toured to London (and, I believe, elsewhere). Prints are now sold on his website, and they are not inexpensive. I know someone who has one, but I actually haven’t seen it. It’s not something that I am looking to add to my own collection. 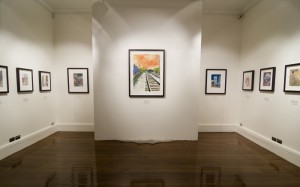 *This, it turns out, is a belated entry. I had incorrectly noted the Drawn Blank paintings as a 2008 project, as that is when they were shown at the Halcyon Gallery in London (that’s an installation view of that particular show directly above), but they should have been written about last week. I regret this error, I suppose.