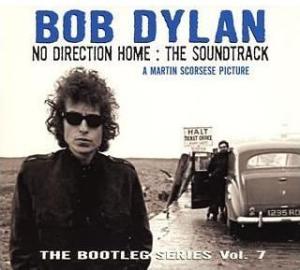 I’ve previously written about the 2005 Martin Scorsese documentary, No Direction Home, in February and I’m not going to re-watch that documentary this week. I will say that it was the project that was probably most responsible for bringing me back towards Dylan in my adulthood. Having gone at least a decade without much thinking about him, I can recall watching both nights of the documentary when it aired on PBS. That was as much to do with Scorsese as it was with Dylan. I thought it was tremendous then, and still do. The intervening months this year have probably only raised my esteem for it.
Before this week I had never listened to the soundtrack all the way through in one sitting. I listened to a lot of the individual tracks when I was writing about the early-Dylan era at the beginning of the year, but I have never sat down to just listen to it as an album.
Long story short: This is one of my favourite Dylan albums.
It is a really rich collection of material. There isn’t anything on here that I wouldn’t want to have, and even some of the songs that I don’t much care for (“Mr Tambourine Man” with Jack Elliott) are things that I am thrilled to have. They’ve done a great job of cleaning some of this material up for commercial release (Dylan’s teen-aged home recordings, for example). The vast majority of the material is stuff that I have on other albums or bootlegs, but it is still a remarkable journey through about a decade in Dylan’s life, from Minnesota to the motorcycle crash. It is stitched together almost (but not quite) completely chronologically, and it provides a tremendous sense of Dylan’s evolution. A lot of the alternate versions of the songs are just as interesting – even mores – than the ones that became the official versions. There’s a lot of process in this set, which is a good thing.
It’s a bit of a strange album insofar as I’m not sure that I would ever recommend it to a Dylan novice (Biograph would still get my nod in that category). There’s a lot of great material here, but so much of the greatness depends on its difference from the better known versions. It’s tough to tell someone “You don’t know Dylan well? You should check out this collection of songs that he almost released”. At the same time, it’s not an album for the hardest of the hardcore, who may well be familiar with a lot of this material. It’s a bit of an outlier in the Bootleg Series from that standpoint – somewhat akin to the Rolling Thunder set, which also cherrypicked key pieces from a much larger archive that would be well known to the bootleg collectors.
For where I’ve wound up – fully cognizant of the fact that I’m not yet a Dylan hardcore, but much further along the continuum than the typical listener – it hits me right in the wheelhouse. I was listening to this on my bike road home from work tonight (possibly one of the last warm rides of the season given the forecasts) and I extended my ride because I was enjoying it so much. There are versions of songs here that I think are really great – “Leopard-Skin Pill-Box Hat” and “Stuck Inside of Mobile With the Memphis Blues Again” – are both versions that I find more interesting than the standard versions. “When the Ship Comes In”, from Carnegie Hall in 1963, I liked better today than ever before.
I have a feeling that this is a collection that will hit heavy rotation with me once I wrap this whole project up.