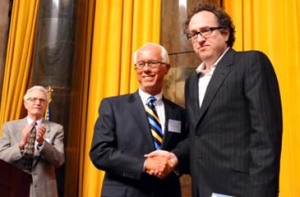 In 2008, Bob Dylan was awarded a Pulitzer Prize. Not for Chronicles, but, as the citation indicates: “for his profound impact on popular music and American culture, marked by lyrical compositions of extraordinary poetic power.” Well okay then.

Dylan, almost needless to say, didn’t bother to go to the luncheon – that’s a picture of his son Jesse accepting the award on his behalf. Dylan was touring Norway at the time of the banquet.

I figured that I would probably pass on even noting this event in Dylan’s life. There’s not much to say about it other than to note that The New York Times seemed gobsmacked by it, and they got a good quote from Jonathan Lethem.

Then it occurred to me. While I had previously noted that Dylan was halfway to EGOT – the mythical winning of the Emmy, Grammy, Oscar and Tony, a feat accomplished by the likes of the late, great Mike Nichols – did this trifecta – Grammy (multiple times), Oscar, Pulitzer – put Dylan in a whole new aspirational category? GOP?

As it turns out, no, it doesn’t. There are dozens of people with the Grammy and the Oscar – that’s not a particularly uncommon combination, particularly for people who do soundtracks. Even a quick perusal of wikipedia gave me Stephen Sondheim, who won a Pulitzer for Sunday in the Park with George, Frank Loesser (How to Succeed in Business Without Really Trying), and two Pulitzers for Oscar Hammerstein (Oklahoma! and South Pacific). I’m sure that there are others out there.

I’d rather have a Pulitzer than an Emmy any day.