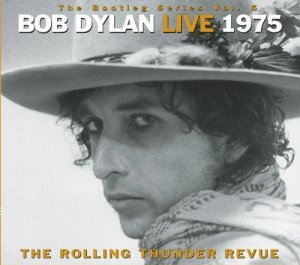 I need to write this one so that I can move on.

2002 saw the release of Bob Dylan’s Bootleg Series v5: Live 1975, The Rolling Thunder Revue. I’ve just listened to this double-CD twice and I’m enraptured by it. There is not a single bad performance on here. In fact, the album is so good that it actually reminds me of the few things that I don’t like. For instance, I don’t like “One More Cup of Coffee” here, but it is a good version, which, I guess, means that I don’t much like that song. That was instructive.

For me, this is clearly one of Dylan’s best albums, and if you reduced me to only a couple of albums that I could ever listen to by him ever again, this would be one of the ones that I would save. This is one of my favourite eras of his music, and the selection here is fantastic. Over the course of this year I’ve been slowly acquiring bootlegs of all of his 1975 performances where I can – I have dozens now – and I could even imagine extending this long and wasted year to another one where I listen to the entire tour. Bootleg Series v5 takes a lot of that work away. I can’t say for certain that these are the absolute best versions of each of these songs from the tour, but if they’re not they must be pretty close.

Moving back in time like this has been a bit of a revelation. While I’ve been enjoying early-2000s Dylan, this is a stark reminder of what he used to be – particularly in terms of vocal control. I actually think he is slightly better live on his early Gospel tours, but I prefer the song selection on this tour. This is really prime material.

People that nitpick Bootleg Series v5 note that it doesn’t really mimic the format of the shows. That’s a fair complaint. Some bootlegs give you the whole deal – with the sets by all the supporting acts – and those are generally the ones that I prefer. Obviously, a lot of Dylan fans aren’t buying double or triple disc sets to hear Roger McGuinn. It might have been nice to release an alternate version structured that way. Nonetheless, you do get Dylan and Baez on four tracks here, which gives some sense of what was going on. Very clear reminder this morning while driving my wife to the airport that Baez is the only person to ever successfully duet with Dylan – the two of them are great together in the same way that Dylan and almost anyone else is always terrible. I’d quickly buy a Dylan/Baez live duets through the years album.

I do think that there are a couple of missed opportunities here. One of them is “Sara”. Though this is a brilliant version of a song that Dylan only played live 33 times (and never since January 1976 – I can’t imagine that he’ll ever play it again, but I’ve been surprised before), part of me would have liked to have seen them include his final performance of that (though, technically, 1976) in Houston (acoustic guitar and fiddle) just for the pathos of the whole thing. I also would’ve liked a “Simple Twist of Fate” from the period where he was messing more deliberately with the lyrics and rewriting what is, on the album, an absolutely flawless song.

Nonetheless, this is a great compilation. All of the (then unreleased) songs from Desire are included (“Romance in Durango” (with a shout-out to Larry Sloman!), “Isis” (missing a verse), “Oh, Sister”, “One More Cup of Coffee”, and “Sara”. There’s really not a dud on the whole thing.

This was, I believe, the first Dylan album that I ever downloaded. I don’t have the CDs, but I was curious to have this album even after years of not really listening to Dylan at all. At this point it was clear to me that the Bootleg Series was a seriously great project – all of the five first volumes are absolutely essential listening. Look, I’m putting this one away for the rest of the week. I can’t get trapped back in 1975 when there’s still so much to 2002. I mean, Dylan’s going back to the Newport Folk Festival – the scene of the original crime – almost forty years later. Now who wouldn’t want to listen to that?