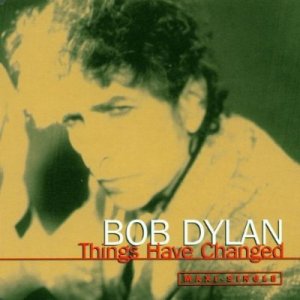 “Things Have Changed” was recorded for the soundtrack of Curtis Hanson’s 2000 film, Wonder Boys. I’ve seen that movie and read the Michael Chabon novel. I like the movie – it captures a lot of what is great about the book (particularly the comic moments), and the major drawback is that the entire day that Grady (Michael Douglas) spends with his ex-wife’s family is excised (it probably would have required the film to be another forty minutes longer). This is probably Douglas’s best ever performance, and the whole cast is really strong. I had intended to rematch the opening just to hear the song being used, and I wound up watching the whole thing. It’s sneaky that way.

I’m not sure I’d say that this is the best song that Dylan wrote for a movie soundtrack (“Knockin’ On Heaven’s Door” would be a strong contender for that title), but it perfectly used here. If you wanted to knock it, you’d probably say that it is a little too on the nose about the plot and characterization in the film. Only the first verse is played during the opening credits (the whole song is played over the closing credits), and this is how it introduces the film’s lost lead, creative writing professor Grady Tripp:

A worried man with a worried mind
No one in front of me and nothing behind
There’s a woman on my lap and she’s drinking champagne
Got white skin, got assassin’s eyes
I’m looking up into the sapphire-tinted skies
I’m well dressed, waiting on the last train

People are crazy and times are strange
I’m locked in tight, I’m out of range
I used to care, but things have changed

This is the great old Dylan back – fantastic, potent imagery coupled the fatalism that has haunted his last few recording projects. I love this song.

It’s not the only Dylan that shows up in the soundtrack either – Hanson walks us through a lot of great late-period Dylan, incluindg “Shooting Star”, “Not Dark Yet” (given a prominent spot when Grady rescues the young James from his parents’s house – an absolutely on point use of that song), and “Buckets of Rain”. Three Dylan compatriots also get used quite well: John Lennon (“Watching the Wheels”), Leonard Cohen (“Waiting for the Miracle”), and Neil Young (“Old Man”). Of these, only the Young felt out of place – Hanson plays it when Grady betrays James by sending him back to his parents and it seems like such a direct literalization of the sentiments of the scene that it didn’t work for me at all.

The music video for “Things Have Changed” was also directed by Curtis Hanson, who drops Dylan into stylized pieces of the film so that it looks like he’s signing directly to Robert Downey, Jr. or hanging out in a diner with Tobey McGuire. It’s one of the better Dylan videos in quite some time. It has an odd moment at the end where Dylan morphs into Michael Douglas. That hat does absolutely nothing for Dylan. You’ll see what I mean:

The disappointment of the video is that they don’t include Dylan standing on Grady’s front porch in the rain while wearing a pink bathrobe. Somewhere there’s an alternate universe where Dylan’s career quickly faded out and he’s a pot-smoking 60s relic spinning his wheels in a pink bathrobe. Fortunately, that’s not the world we live in.

I want to note that this was the first album on the Dylan project that I accessed through Spotify, which has just launched in Canada. They have a lot of Dylan, which is useful to me for when home sharing isn’t cooperating for me, but apparently perhaps not Young or Van Morrison, because both of those songs were blocked out on Spotify Canada. That was frustrating.