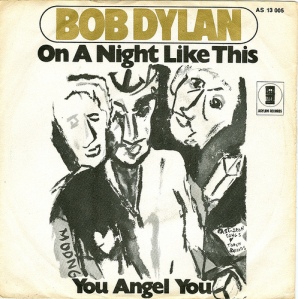 The first single from Planet Waves, “On a Night Like This”, seems to tell the story of where Bob Dylan was with the hit parade in 1974. Despite the fact that his tour was sold out, and despite the fact that Planet Waves was his first album to hit #1 on the sales chart, both of the singles died. “On a Night Like This” only peaked at #44 on the hit parade.

I have to say, it’s sort of hard to see why with this. “On a Night Like This”, which leads off his most successful album to date, is a commercial pop hit if there ever was going to be one. The lyrics don’t add up to much other than romance, but the song is infectious, singable, and danceable. What more could you ask for in a pop song? This isn’t likely going to be anyone’s favourite Dylan song (and it may not even be the best thing from the album), but it is fun and frothy. It’s hard to imagine people actively disliking it. I suppose that isn’t what anyone was looking for from Dylan at this point in his career. Dylan will be an album guy from here on in, even though he will release dozens of additional singles, must won’t go anywhere.

The B-side of “You Angel You” actually probably makes this even twice as poppy.

Here’s Los Lobos with a nice cover, including a second verse sung in Spanish. Just try to hate it. You can’t!