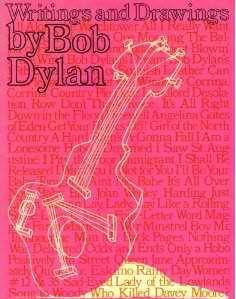 I spent a fair amount of misdirected energy this week on Writings and Drawings, Bob Dylan’s second book. I looked for it in various places, considered buying it, considered not buying it, finally asked myself if we might not just have a copy in the University library (we do, of course), then checked it out only to find that I essentially already own it. My first instinct on plucking it from the shelf was “Boy, this looks a lot like the Complete Lyrics book that I bought in 1985, even down to the fonts”. A check of that latter book reveals what I think I had never noticed before: a notice on the front claiming “Includes All of Writings and Drawings plus 120 new writings”. So there you go.

The “writings” in Writings and Drawings are mostly lyrics, arranged by album from Bob Dylan up to New Morning. The value of a book like this one would have been, in the pre-internet days, the ability to avoid wearing out an album if you were trying to learn one of his longer or more complex songs, and the fact that the book contains a large amount of unrecorded songs. From the Bob Dylan section, for instance, there are the two originals from that album (“Talking New York” and “Song to Woody”) and eighteen unreleased songs (some of which would have been circulating on bootlegs during this time frame). Similarly, Freewheelin’ has all the songs from the album plus sixteen other things.

Not all of the other things are lyrics, some are poems and liner notes. At the beginning of this project, for instance, I didn’t read his notes for Joan Baez in Concert, and have just done so now. On first listening to (rather than hearing) Joan sing:

An’ when I leaned upon my elbows bare

That limply held my body up

I felt my face freeze t’ the bone

Could not’ve moved ‘f called upon

The notes are a lengthy statement of Dylan’s aesthetic (whether or not he’s putting us on is another question entirely), in which ugliness and authenticity matter much more than beauty, until he is won over by her voice (“the bars between us busted down”).

The other half of the title is “Drawings”, but it is far, far less than half of the book. There are a few dozen drawings in the book – mostly pen sketches, and not much more than doodles. At this time Dylan seemed to be drawing a lot from life – men on park benches in New York, and so on. His drawings are rushed, and he puts very little vitality into them. They are free from cross-hatching or shading, just simple line drawings. Some are semi-abstract doodles (next to “Ballad of a Thin Man”, for instance) and some are highly literal (“This Wheel’s On Fire”). None of them show anything more than a rudimentary talent, which is probably not surprising if you’d looked at the painting he did for the cover of Self Portrait.

Dylan will turn increasingly towards the visual arts in the years to come – I took six more books of paintings and drawings out of the library yesterday with the hopes that no one will recall them during the year. It’s not an area that I think he ever got really good at.