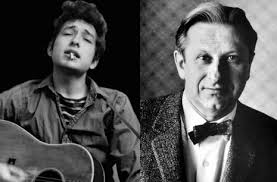 Of all the early interviews that I’ve now listened to with Dylan the best by far was conducted by Studs Terkel. The interview aired on WFMT in Chicago, and was recorded on April 26, 1963, the day after Dylan performed at The Bear. The interview runs for just over an hour, and Dylan performs seven songs. About half the time is taken up by a discussion between the two men, and you can hear the “voice of his generation” rhetoric really beginning to take hold.

Terkel is a very good interviewer for Dylan. He is cognizant of all the things that Dylan is interested in, and more. When Dylan says that he is going to sing “Boots of Spanish Leather”, Terkel immediately assumes he means The Gypsy Davy, a folk song of great note. Dylan’s version borrows a bit from that – and he performs a version of The Gypsy Davy on some of the earlier tapes – but it is a different song. Still, Terkel’s instincts were right, and he is able to talk easily with Dylan about Woody Guthrie and Pete Seeger.

Probably the most interesting segment of the interview is when the two talk about the differences between the politics of the 1930s and the emerging politics of the 1960s, which Terkel identifies as a tendency towards group identification (in the 1930s) as opposed to individualism (in the 1960s), and which the younger Dylan sees as the difference between a politics that assumed a right or wrong, with me or against me logic, and one that sees the world as filled with greys. Dylan gets lost a bit on a tangent trying to present an argument about the root causes of evil, but the whole thing is quite revealing of where he might have been with his thinking at the time.

One thing that is striking about the interview is the off-handed way that it closes – Dylan suggests that he doesn’t really have an appropriate final song to sing, so Terkel says that they’ll just play something from his album (meaning Bob Dylan – Freewheelin’ wouldn’t be released for another three weeks) and then Dylan remembers that maybe he should play “Blowin’ in the Wind”. It’s a kind of cute moment where the young man seems to think “Oh, wait, I have a single to promote!”.

The other thing that is remarkable about the interview, as with the earlier one conducted by Cynthia Gooding, is how enamoured Dylan’s interviewers are with him. Terkel can’t stop raving about his song-writing, and about how he seems to represent an entirely new way of looking at the world. At one point he reads from a letter that he’s received from an alienated, young man and asks for Dylan’s commentary on it. You can tell that Terkel thinks Dylan is an entirely new kind of being, and Dylan, at this point at least, is not averse to running with it.

This interview is all over the web. Here’s the whole thing on YouTube: