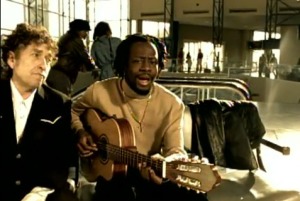 So sings Wyclef Jean in “Gone Til November” the third single from his first post-Fugees album, The Carnival. That would be a minor thing – lots of musicians have name-dropped Dylan – but the truly bizarre thing is that Jean then got Dylan to appear in the music video. Shot at an airport, Jean sort of wanders around singing this sad song about leaving his girl, and then, suddenly, he’s sitting on a bench and Bob Dylan is beside him in a black cowboy shirt just sort of, I don’t know, smiling beatifically at him. It’s kind of creepy.

Jean told MTV: “‘Gone Till November’ is an original song that I wrote, but I mention Bob Dylan’s name in the song. I said, ‘I had none, so I had to do some/ So I’m knockin’ on heaven’s door like Bob Dylan.’ And I was like, ‘Yo, we should get Bob Dylan in the video!’ And it was like, ‘You ain’t getting no Bob Dylan! Bob Dylan never shows up in videos, man! Bob Dylan doesn’t do that kind of stuff!’ But I was like, ‘Yo, we can get him, man!’ And we got Bob Dylan. I think that what Bob Dylan brought to the game is lyrical continuity in the music, and [the idea that] it’s not all about the commercialism. It’s about standing up for something and speaking out for the rights of the people.”

I don’t know about any of that. I mean, I certainly don’t get the idea that this song is about speaking out for the rights of anyone, but who am I to judge?

One thought on ““Gone Till November””