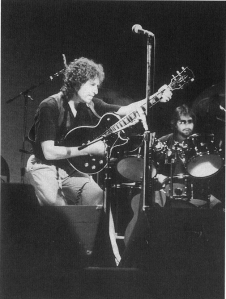 For the second year in a row, Dylan did a residency in November in San Francisco. At the first show it opened as his Gospel Tours did: some songs from the back-up singers. His own set begins with “Gotta Serve Somebody” and “I Believe in You”, the same openers from the year before. The crowd is expecting more of the same. Then those opening chords and a sort of “Well, that sounds like, but no it couldn’t be, but, oh holy shit, it really is, I’m going to freak out now and start screaming” reaction to his biggest ever hit. Secular Dylan is back!

It doesn’t last long. He moves on to “Man Gave Names to All the Animals”, “Precious Angel”, and “Ain’t Gonna Go to Hell” but then it happens again: “Girl From the North Country”! The second half of the show is similarly mostly gospel music, but he also does “Just Like a Woman” and “Señor (Tales of Yankee Power)”. The encore is “Blowin’ in the Wind”. Bob Dylan is back, baby!

The whole Warfield residency sounds really good. As I mentioned earlier, 1980 is a great year vocally for Dylan because he believes in what he’s singing. The addition of these, and other, classics into his set completely revitalizes them (again, this is about the fourth time some of these songs have been totally revivified). I didn’t have time to listen to a dozen shows this week, but I really want to. This seems to be really peak material.

A number of the shows are notable for their guest appearances:

12 November has the only ever live performance of “Caribbean Wind”

15 November is a guest slot for Mike Bloomfield on “Like a Rolling Stone”, which, of course, he played on the original album. Bloomfield died a few months after this show of an overdose.

16 November Jerry Garcia plays guitar on about ten songs, the first time (of many) that Dylan and Garcia performed together

19 November has a guest spot by Maria Muldaur

These shows are still more religious than retrospective. This will be quite different by summer 1981, when, during The Shot of Love Tour, there would be more of his past hits and only a smattering of religious music. This is the beginning of the end of the Dylan gospel phase, although it is clear that his personal spiritual journey was far from over. They are also, for the most part, very good shows (Garcia and Dylan sound a little rough together at times in that show, very muddied. Maybe I just don’t like the Grateful Dead sound).

I have to say, I wound up liking the Dylan of 1980 far more than I ever dreamed I would. There’s been a wide variety of things to hold my interest and things to learn and discover. This was a good year for him. It’s no 1975 (but what is?) but it is far more interesting than, for instance, 1970. I never would have guessed that.

Onward to the Reagan era!

Here’s Dylan and Garcia playing “To Ramona”, the first song that they ever played live together: