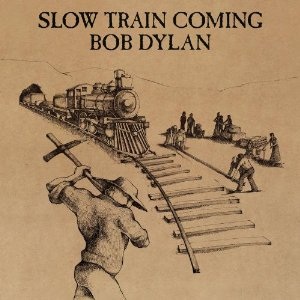 I’ll admit it – I was a little bit scared of this album. You hear the stories. The legends of the born again period. The genius lost in confusion. The earnestness of the songs. Dire Straits as the backing band. Well, Slow Train Coming has all that and, you know, it’s not really that bad. Well, maybe the Dire Straits.

The only song that I knew well from this album was “Gotta Serve Somebody”, which was enough of a hit, that it is pretty inescapable as a radio presence. Most of the rest has been new to me this week, and it has been a hit or miss kind of week.

Let’s get rid of the bad right away. “Precious Angel”, as noted, is a song that I’m quite happy to be done with after this week, though I think it probably gets played at some live shows next week as well. Almost done with that one.

The title track, which is actually known as “Slow Train”, is just not very good at all on the album. There are live versions where it is better, but it is still not actually good. The third verse is highly problematic.

Look around you, it’s just bound to make you embarrassed

Deciding America’s future from Amsterdam and to Paris

And there’s a slow, slow train comin’ up around the bend

Really, I could have lived a long time without hearing Dylan sing this kind of nativist bullshit. So that’s another one that I’m looking forward to jettisoning.

“Gonna Change My Way of Thinking” has a lot of power chords, and, really?, is that a cowbell? I think it might actually be a cowbell. Not good. “When You Gonna Wake Up?” is also bad (the “Gonna” songs on this album are all bad….). Lots of Dire Straits touches on that one, and these horrible lyrics:

Counterfeit philosophies have polluted all of your thoughts

Karl Marx has got ya by the throat, Henry Kissinger’s got you tied up in knots

Should probably just leave Kissinger out of your gospel songs, I’m thinking.

“Do Right To Me Baby (Do Unto Others)” is fine, but that’s all it is. Just fine.

So, that’s a pretty bad track record. That said, I do think that there are three songs on here worth keeping.

First, “Man Gave Names to All the Animals”. This one gets a lot of votes for “worst Dylan song ever” (please, “If Dogs Run Free” – end of argument). I don’t see it. It’s a great song to sing around the bonfire at your church camp, or in a Sunday school class. It’s clearly a song for children (a children’s book will even be made out of it somewhere down the line), and that seems to bother some people for some reason that I can’t see. It’s a fun song! I also like the fact that he drops the final line of the last verse:

He saw an animal as smooth as glass

Slithering his way through the grass

Better, the band doesn’t resolve the song to its opening chord. The first time I heard it (on Sunday) I thought “that’s absolutely brilliant!”. Live, his back-up singers hissed after “a lake”, and that didn’t work nearly as well. The unresolved note is much more powerful.

Second, “I Believe In You” is, frankly, a beautiful song. This is one that Dylan has kept playing live (as recently as 2009). It’s just a great, great love song to God. He performs it well here, and it is simple and it is elegant, and it is great. I love the slide guitar bits. The only thing that keeps this from being the best-late 1970s Dylan song is:

Third, “When He Returns”. This was the shocker for me. Most of the time the final song on any Dylan album has a good chance of being a loser. Not this time. Dylan had actually planned for this to be sung by one of his back-up singers, and to close out the album that way. As it is, it’s Barry Beckett on the piano, a driving, riveting performance, that Dylan sings over. Apparently he did this eight times, and on the eighth he nailed it. Clinton Heylin says that this is his best vocal performance on an album since “Visions of Johanna”. He might be right about that one. This a great Dylan performance, proving that he hadn’t actually lost it, he’d just changed it.

In his interview with Bruce Heiman on KMEX Dylan was asked about separating the songs from the music:

I know some people won’t like any of these songs because they won’t be able to separate the song from the gospel that informs it. That’s too bad, because at least three of the songs on this album are really quite good. That’s a better number than some of the early-1970s albums.

One thought on “Slow Train Coming”