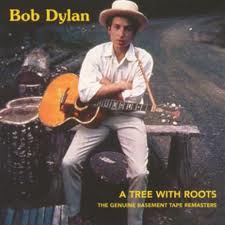 So, okay, The Basement Tapes.

This is the legendary bootleg – a dip into the creative processes of Bob Dylan so epic that it created an entire sub-industry. I’ve been listening to this music for two weeks now, grappling with it, struggling with it at times. Greil Marcus was so moved by it that he wrote an entire book, Invisible Republic, about it. That’s Dylanological, I thought, only the hardest of the hardcore could do that.

I suppose that I should be up front. I first heard The Basement Tapes material on the double-album that Columbia released in 1975, where the songs have been cleaned up in post-production, with new instrumentation added by The Band. I never liked that album. Songs like “Quinn the Eskimo” and “Million Dollar Bash” reminded me of how much I hate “Rainy Day Women #12 & 35” – the jokiness was just irritating to me. “I took my potatoes down to be mashed,” Dylan sang, and I just thought “This is the worst thing ever.” I was literally embarrassed for him. So how to get into not just a double album, but the five hours of music that exists on A Tree With Roots?

Well let’s start with Greil Marcus. I read the book on a plane from Vancouver from Hong Kong, which strikes me as just about the least likely place to read a book about “the old, weird America”. This is the second book by Marcus on Dylan that I’ve read this year (he also wrote one about “Like A Rolling Stone”) and I’m slowly going through his collection of essays about Dylan as they become appropriate. I’d read Marcus in the past, but not recently, and not with much memory of his earlier work. Sometimes I think he’s a genius, and other times his digressions wear on me. There’s more digressing than genius in Invisible Republic, but here it seems more appropriate, since there is so little thrust to the recordings that we’re listening to and thinking about.

The first thing that I liked about A Tree With Roots were the covers. They’re the easiest thing to relate to: Dylan segues from “Big River”, one of Johnny Cash’s earliest songs, to “Folsom Prison Blues”, one of his best. They cover Hank Williams and Elvis Presley, and it is genuinely interesting to hear them working through some of these songs. An album of covers isn’t what I’d want from Dylan, but hearing him run through influences is interesting. He revisits songs from a decade earlier, like “Young and Daily Growing”, and it was nice to hear them again. I’ve missed them, lo these several weeks.

The other way in was to focus on those moments where you can hear Dylan piecing a song together – which is no different than listening to something like The Witmark Demos, or hotel recordings for their false starts. On “I’m A Fool For You”, for example, the whole song just stops when Dylan runs into a wall. “I’m playing this in a funny key,” he tells The Band after he calls out a mistaken chord change “Not D, not D. E. I’m sorry. This key” he says as he strums, and then, as if nothing had happened, they’re right back in the midst of the song. “No, F,” and he keeps on going. This kind of jamming and compensating is refreshing, it’s endearing. These moments, like the producer asking “Is it rolling, Bob?” at the start of “To Be Alone With You” on Nashville Skyline are humanizing, intimate, and sometimes fascinating.

Of course, at other times, they’re almost unbearable. Listen to “You Gotta Quit Kickin’ My Dog Around”. Dylan starts by explaining the harmony that he wants in the background, and you can hear them bring it in over the guitar. But the whole things breaks down, with The Band chanting “Dog dog dog. Why why why” in deep bass voices like they’re the band from The Muppets. The next track is no less goofy. “See You Later, Allen Ginsberg” begins from a stray line that cracks Dylan up and they riff off it for a while, sort of pointlessly.

This is the material that I was struggling with, but Marcus set me on the proper path. Writing of these same two songs, he calls them “priceless” – meaning without price. They’re free, he writes, they’re for nothing, there is no point to be sought. They exist because they can exist. I was beginning to see the light.

The best chapter in Marcus’s book deals with Harry Smith’s six-album collection, Anthology of American Folk Music, the single document that more than any other inspired the folk revival of the 1950s that Dylan would forcefully squash with the Butterfield Blues Band on a Newport stage. This was the Bible of the folk movement – recordings of hillbillies and the delta blues from the 1920s and 1930s that every folk singer memorized and played, including the Dylan who first played the Greenwich Clubs. Before he discovered Woody Guthrie almost all of Dylan’s repertoire was from this collection.

Marcus points to the central importance of gathering those songs, and I’m completely with him. But he moves a step further, arguing that The Basement Tapes was a 1969 equivalent. This is the argument: Having trashed the folk movement and revolutionized rock, Dylan and his friends retreated to Woodstock, New York in order to excavate the collective American musical unconscious. There was no difference between an Elvis cover and a song that was hundreds of years old (“900 Miles”, say, or “Roisin the Bow” or “Po Lazarus”, all of which get a workout here). Dylan had denounced folk based on what he saw as efforts by others to define what folk was and could be. He wanted to move in another direction, and on these tapes he does. Dylan levels folk and pop, recreating them as American music. Dylan and the Band stumbling through Ian Tyson’s “Four Strong Winds” to no conclusion (“It lingers there“, Dylan says at the end, as The Band brings the song, erroneously, back around to the four chord), is not a great version of the song – but it’s a version of the song, in the same way that “I Wish I Was a Mole in the Ground” was a version of that song on the Anthology of American Folk Music.

Here’s where Greil Marcus earns his money: He notes the huge gulf that exists between Bob Dylan and Bruce Springsteen. Not in terms of talent (I’m not having that fight today), but the vast gulf that seems to separate the only eight years that differentiate them in age. Dylan is eight years older than Springsteen, but he seems at least a full generation older. Why? Because Dylan played with Dock Boggs at Newport. Dylan met the people who were recorded on Smith’s albums – he played with them. He has a direct, first-hand connection to the pre-War folk scene, if only as it passed on to another generation. Springsteen has no such connection. When I listen to Springsteen’s Pete Seeger tribute album, for example, I am always struck by how much I don’t like it – by how much it doesn’t sound like the Pete Seeger that I like. Marcus has allowed me to realize how distant it is from Seeger. No matter how well-intentioned, and I do think it was that, there is a gap there. The gap that Dylan occupies.

And that’s Marcus’s argument in a nutshell. The Basement Tapes is the 1960s version of Harry Smith’s recordings, of Dock Boggs (whom he writes a chapter about). New songs, old songs, polished songs, drunken songs – it’s an archaeology of American songwriting, a retreat into the weird history of America. From that standpoint, I can find some love for A Tree With Roots. Listening to it with Marcus’s ears for the strains of Dock Boggs, I can find a path through the basement. I won’t listen to the first cut of “The Spanish Song” ever again, or to Rick Danko’s abominable out-of-tune fiddling on “900 Miles”, but to the rest of it, yes.

Finally, there’s the key to the whole thing: “I’m Not There”. I’m certain that I had never heard this song before I saw the film which borrows its name, and even then I can’t say that I paid great attention to it (Sonic Youth covers it on the closing credits). It’s incredible. Dylan apparently sang this song once in his entire life. All five of its verses were improvised as they were playing, and he never performed it live. It has never appeared on  one of his albums (his version does appear on the film soundtrack). It is incredible. Imposing. A ridiculous tossed-off masterpiece, as if drawn from the ether. A song like that is worth digging through any amount of rubbish from the boxes in the basement.

One thought on “The Basement Tapes”