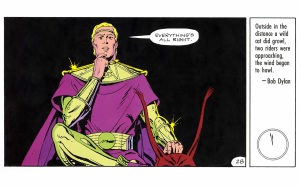 Whatever else its relative strengths and faults, Watchmen, the revisionist superhero series that helped redefine the genre in the 1980s, is a masterpiece of craft. Writer Alan Moore and artist Dave Gibbons conspire to control even the most minor of details, painstakingly crafting a superhero epic that rewards – even demands – the close attention of re-reading. One of the hallmarks of the series was that in each of the twelve chapters, the title would, in the last panel, be revealed to have been part of a larger quotation that serves as the epigraph for the piece as a whole. Moore chose these citations carefully and smartly, quoting poets like William Blake and Percy Shelley, philosophers like Friedrich Nietzche, and scientists like Albert Einstein. Twice he cited Bob Dylan.

Dylan is an important presence in Watchmen. Indeed, the very first chapter is titled “At Midnight All the Agents”, a quote from “Desolation Row”, his bleak 1965 epic:

Now at midnight all the agents

And the superhuman crew

Come out and round up everyone

That knows more than they do

Then they bring them to the factory

Where the heart-attack machine

Is strapped across their shoulders

And then the kerosene

Is brought down from the castles

By insurance men who go

Check to see that nobody is escaping

This is an ideal citation for Watchmen, the story of superheroes run amok and a United States that is drifting increasingly towards the fascist politics of a surveillance state. Moore and Gibbons invoke the darkness of Dylan’s vision from the word go, borrowing a bleak and nasty sensibility that serves as the important undercurrent in a story that has no hero, only an increasing numbers of villains and by-standers. Desolation is clearly the order of the day when you create a character called The Comedian who is both a rapist and mass murderer.

Chapter Ten, “Two Riders Were Approaching”, quotes from Dylan’s 1967 hit, “All Along the Watchtower”. Not so much a thematic cue as a description of the events that lead to the climactic confrontation between Ozymandia, Nite Owl and Rorschach, the quotation is not as compelling as the one from “Desolation Row”, though it does nicely tie into the comic’s Biblical themes (Chapter Three quotes from Genesis).

It is striking to me that Moore and Gibbons use two quotes from only a single writer, and that both would be mid-1960s Bob Dylan. Just as Dylan used poetry to elevate the status of pop music, so too do Moore and Gibbons use it to raise the public’s perception of comic books generally and the superhero genre specifically. Dylan is the perfect role model for artists looking to turn a non-serious art form into an estimable one. His is the road map that one would want to follow.

Interestingly, the other commonalities in the chapter titles come from Romantic poetry (Blake, who is used to frame the most audacious chapter – the completely symmetrical Chapter Five, and Shelley, who evens lends a name and a tragedy to the ostensible villain (though perhaps the hero) of the piece). The connection between Dylan and the Romantics is certainly a strong one, particularly given Dylan’s own strong interests in the writing of that period. 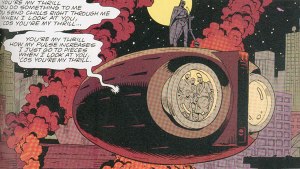 Watchmen, the comic book, uses music somewhat sparingly. One notable moment is when a crowd is calmed by Nite Owl broadcasting Billie Holiday’s “You’re My Thrill” from his airship. The execrable film version uses three Dylan songs (and also the Holiday song), the two from the book (though not Dylan’s versions) and “The Times They Are A-Changin’” over the opening credits. For the film, in the talentless hands of director Zack Snyder, Dylan is the voice of a generation rendered ironic. For Moore and Gibbons, it is clear that Dylan was the guiding light in the darkness, an artist who modelled a completely different way of doing things.

From the film, here’s My Chemical Romance proving themselves absolutely not up to the challenge of performing three of Dylan’s ten verses: